What is Bicycle to Work Scheme?

On 1 January 2009 a new government scheme to encourage people to cycle to work came into force. Cycling keeps you ﬁt, it’s fast, cheap and reliable – and it’s good for the environment.

The new bike scheme covers bicycles and accessories up to a maximum cost of €1,000. The bicycle must be purchased by your employer but the scheme can then operate either with your employer bearing the full cost of the bicycle or by way of a salary sacriﬁce agreement (like the existing travel card scheme) in which you pay for it, tax-free, over 12 months.

Participating in the bicycle scheme is easy. If your employer decides to take part, they simply buy the bike and equipment on your behalf and off you go. Its is up to you and your employer to decided whether they buy the bike outright for you or whether you pay for it via ‘salary sacrifice’. Either way you save on tax.

The scheme is flexible in its application in that your employer doesn’t have to specifically notify the Revenue Commissioners that you’re availing of the scheme and there are no Government forms to fill out. However, your employer does have to maintain the normal records such as invoices and payment details associated with buying the bike.

Our objective is to provide people with the best range of bikes available through the BTW scheme; remove any hassle involved in signing –up; providing professional advice and assistance and an after sales service by our staff.

For any other information contact us via e-mail or call.

Regular cyclists are as fit as an average person 10 years younger. live two years longer than non-cyclists and breathe in less pollution from traffic than car drivers.

Cycling is the fastest way to get around town and if you arrive by bike, yellow lines and clampers needn’t concern you. More often than not, you can park right outside your destination. Unlike a car, to use the roads a cyclist does not need to pay motor tax, NCT or breakdown cover and, above all, there aren’t any fuel bills.

Cycling is also the least polluting way of traveling after walking. Ten bikes can be parked in the space of one car and 2kg of carbon are saved for every short journey that is made using a bike instead of a car.

Particularly in congested urban areas, using your bike to commute can bring you all sorts of benefits:

Saying goodbye to restricted parking zones, irregular public transport, the last bus home and grid-locked traffic. On a bike, you can be flexible and spontaneous, make an unplanned visit to a shop, a park, meet a friend, etc.

Twenty minutes of gentle cycling burns up to 100 calories. Regular cycling makes you fitter, as fit as an average person ten years younger. Cycling also raises your metabolic rate, helping you to maintain a healthy weight. Riding a bike firms the thighs and bottom, while working those tricky lower abdominals, taking you that bit closer to the elusive toned tummy.

No waiting in queues for the bus or the car park. It is amazing how much faster than motorised traffic one can be cycling at an average of just ten miles an hour – cutting through the congestion. You will arrive on time and often before those in a car.

Once you have researched and tried out your route, you will find that your journey time is predictable – bringing peace of mind rather than driving and arriving at work stressed out.
Lower travel costs

If you are currently spending as little as €1.20 a day on fares or petrol, changing to cycling could save over €200 a year – money which can be spent on other things. If the commute costs more the savings are even bigger. 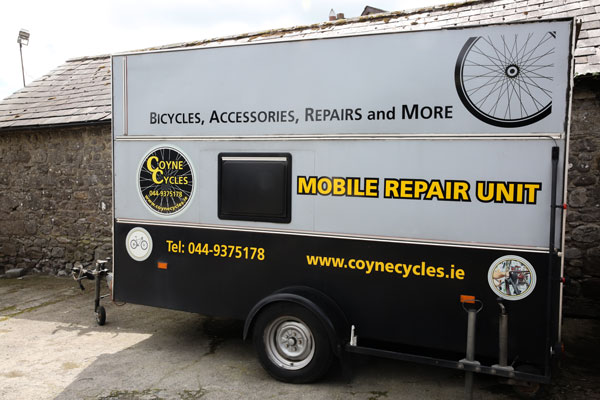 Coyne Cycles are on the road in our new mobile sales and repair unit.

We’ll come to your business, and you can use it. You can buy bikes, equipment or accessories from our store and get your bike repaired. This is a unique service provided by Coyne Cycles — you don’t see too many of these.

Please contact us for a free quote!
Contact Us
Copyright Coyne Cycles LTD. - All Rights Reserved | Web Design - Simply Logo Design
Back To Top
We use cookies to ensure that we give you the best experience on our website. If you continue to use this site we will assume that you are happy with it.OkPrivacy policy